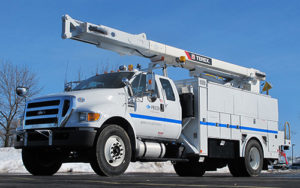 Waukesha, WI – March 11, 2014 — Waukesha based Odyne Systems, LLC, a leading manufacturer of hybrid systems for medium and heavy duty work trucks and winner of the NTEA 2013 Green Truck Award, will be showcasing its advanced hybrid propulsion system at EUFMC in Williamsburg, VA June 1-4. The company will spotlight one of the first trucks being delivered as part of a $45.4 million U.S. Department of Energy (DOE) award for over 120 Odyne hybrid system equipped trucks. Attendees will have an opportunity to hear the quiet system and learn about the significant emission reduction and fuel savings of these vehicles.

Joe Dalum, Odyne President and CEO, who will be in attendance, noted, “We’re looking forward to EUFMC and the opportunity to share how the Odyne hybrid system is evolving into new applications that reliably deliver improved performance for medium and heavy-duty work trucks. 2014 is an exciting year for Odyne and customers throughout the country as we build and deliver over 120 trucks under a Department of Energy Award being administered by the South Coast Air Quality Management District, with support from EPRI, the Electric Power Research Institute. These trucks have just started to be deployed at job sites, and we are collecting data on operating performance for every truck as part of our contract. The industry is very eager to review the metrics and evaluate the significance of the savings. In past data collection efforts, the Odyne hybrid system has proven to lower fuel consumption by up to 50% or 1750 gallons of fuel annually compared to traditional diesel/gas engines. Odyne continues to be the only plug-in hybrid system on a medium- or heavy-duty truck to deliver greater fuel efficiency both while driving and at the work site.”

Odyne systems are modular and can be applied and retrofitted to a wide range of work truck chassis in various applications.  The systems are sold and serviced through a worldwide distribution network including Altec, DUECO and Terex Utilities. Odyne has also selected Allison Transmission Distributors to service Odyne Systems across North America.

About Odyne Systems, LLC
Odyne is a leader in hybrid drive systems for medium and heavy-duty vehicles. Odyne’s advanced plug-in hybrid technology enables trucks over 14,000 pounds to have substantially lower fuel consumption, lower emissions, improved performance, quieter job site operation and reduced operating and maintenance costs. Odyne has fielded more plug-in hybrid trucks to fleets throughout the United States than any other supplier. The name Odyne represents the combination of “O” for Optimal and “dyne” for Force. The company sells its unique modular hybrid system for new and retrofit applications direct to truck manufacturers and through a global distribution and service network. For further information, visit us at www.odyne.com and follow us on Twitter @Odyne.

Allison Transmission (NYSE: ALSN) is the world’s largest manufacturer of fully automatic transmissions for medium- and heavy-duty commercial vehicles and hybrid-propulsion systems for city buses. Allison transmissions are used in a variety of applications including refuse, construction, fire, distribution, bus, motorhomes, defense and energy. Founded in 1915, the company is headquartered in Indianapolis, Indiana, USA and employs approximately 2,700 people worldwide. With a market presence in more than 80 countries, Allison has regional headquarters in the Netherlands, China and Brazil with manufacturing facilities in the U.S., Hungary and India. Allison also has approximately 1,400 independent distributor and dealer locations worldwide. For more information, visit allisontransmission.com.