Odyne’s Advanced Hybrid System Featured on a Ford Chassis Reduces Fuel Consumption by up to 50%. 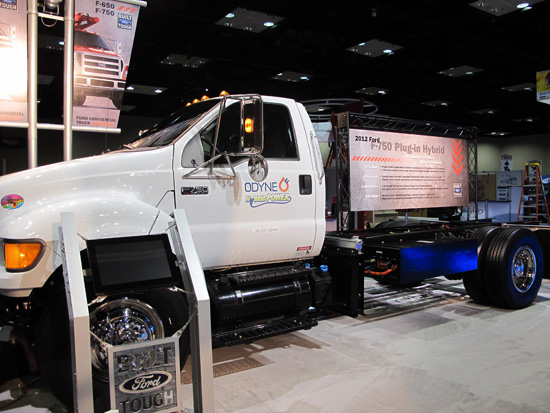 Odyne Director of Sales, Matt Jarmuz, will be speaking at the conference on the Utility and Telecom Applications on Wednesday September 18th at 1:30pm.

Odyne will have a vehicle in the Ride and Drive on September 20th for attendees to test drive.

About Odyne Systems, LLC
Odyne is a leader in hybrid drive systems for medium and heavy duty vehicles. Odyne’s advanced plug-in hybrid technology enables trucks over 14,000 pounds to have substantially lower fuel consumption, lower emissions, improved performance, quieter job site operation and reduced operating and maintenance costs. Odyne has fielded more plug-in hybrid systems for work trucks to fleets throughout the United States than any other supplier. The company sells its unique modular hybrid system for new and retrofit applications direct to truck manufacturers and through a global distribution and service network. For further information, visit us at www.odyne.com and follow us on Twitter @Odyne.

About HTUF
HTUF is a national, multi-year, user-driven program to speed the commercialization of medium- and heavy-duty hybrid and high-efficiency technologies. It is operated by CALSTART in partnership with the U.S. Army National Automotive Center (NAC), with project support from the Hewlett Foundation and the Department of Energy. HTUF has been very successful in helping launch the first production of hybrid trucks and is credited with reducing product development time by up to two years.