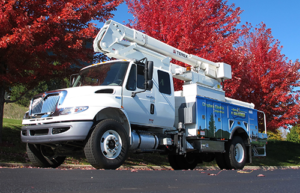 Odyne Systems, LLC is a leader in the development and sale of hybrid drive systems for medium- and heavy-duty vehicles. The name “Odyne” represents the combination of “O” for optimal and “dyne” for force. Odyne’s hybrid system for medium and heavy duty trucks represents the best hybrid power solution for large trucks.

Odyne has fielded more plug-in hybrid systems for large work trucks to fleets throughout the United States than any other supplier. The company sells direct to truck manufacturers and through a global distribution and service network.

Allison Transmission, Inc. has globally endorsed the use of its 1000, 2000, 3000 and 4000 Series transmissions with the Odyne hybrid system as the exclusively-approved PTO-based hybrid system.

To exceed our customers’ expectations by being the leader in providing the highest value hybrid drive systems for medium and heavy duty vehicles.

Odyne Corporation was formed in 2001 for the sole purpose of developing and producing electric and hybrid electric propulsion systems for Class 5, 6, 7 and 8 vehicles.

In January 2009, Odyne Corporation’s assets were acquired by a subsidiary created under the parent company of DUECO, Inc., and relocated to a 100,000 square foot shared production facility in Waukesha, Wisconsin. The new company, Odyne Systems, LLC (Odyne) continued to focus on the development and production of plug-in hybrid systems for trucks over 14,000 pounds.

In July 2011, Johnson Controls, one of the world’s largest manufacturers of battery systems for automotive and truck applications, made a strategic investment in Odyne to fund expansion and to accelerate wide-scale commercialization of Odyne’s hybrid systems for medium and heavy duty work trucks.  Odyne Systems, LLC at that time became independent of the parent company of DUECO, Inc. in order to better focus on all segments of the broader truck market.

In June 2012, Allison Transmission, Inc., the world’s largest manufacturer of fully-automatic transmissions for medium- and heavy-duty commercial vehicles, invested in a non-controlling equity stake in Odyne Systems, LLC.  Lawrence E. Dewey, Chairman, President and CEO of Allison Transmission commented “Odyne Systems’ expertise and experience in the development and manufacture of advanced hybrid control systems made them an attractive partner.”  Odyne strengthened technical and marketing cooperation with Allison Transmission and by April 2014 Allison globally endorsed the use of the popular 2000, 3000 and 4000 Series™ transmissions with the Odyne hybrid system as the exclusively-approved PTO-based hybrid system.

Since being established, Odyne Systems, LLC has focused on the development of leading hybrid technology for large trucks.  Multiple awarded programs with the U.S. Department of Energy, South Coast Air Quality Management District (L.A. area of California), California Energy Commission and the U.S. Department of Defense have helped to drive improvements in Odyne’s hybrid system to meet state of the art performance and efficiency targets.

Odyne Systems, LLC continues to operate independently yet benefits from strong relationships with leading component suppliers, Allison Transmission and numerous vehicle manufacturers.  Odyne has expanded the production and technological advancement of plug-in electric hybrid drive systems for medium and heavy-duty trucks. Odyne advanced plug-in hybrid systems are available world-wide for a wide variety of applications and are sold directly to final stage manufacturers and other companies that sell trucks directly to end use customers and fleets.

Typical customers include fleet managers and/or executive decision-makers from the utility, construction, other industries and governmental entities. Odyne technology provides our customers with the following benefits:

IMPORTANT NOTICE: Odyne Systems, LLC has no relationship with Odyne Corp. which is listed as ODYC on the OTC Pink Sheet.
Page load link