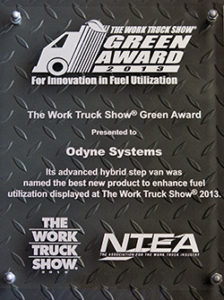 The Work Truck Show 2013, held March 6−8 at the Indiana Convention Center in Indianapolis, IN, showcased the latest commercially viable hybrid and alternative fuel vehicles. Odyne used the event to introduce a unique walk-in van equipped with a plug-in hybrid system providing electrical power from a large advanced battery system. The batteries can be recharged for uninterrupted extended operations at the work site by the chassis engine, or through cleaner energy from the grid. The new hybrid system provides benefits during driving and stationary operations by reducing fuel consumption, emissions and work site noise.

Designed for ComEd’s underground electrical maintenance work in Chicago, the van is built on a chassis from Freightliner Custom Chassis utilizing a Utilimaster walk-in van body and Team Fenex manhole air delivery system. The vehicle can be parked above a manhole to provide workers below with all their electrical needs, plus cooled or heated fresh air. The system significantly reduces chassis engine idling and delivers over 14 kW of power for tools and other applications without the need for a separate diesel generator. 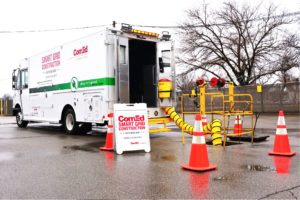 “We are very excited to bring this advance in hybrid and truck electrification technology to ComEd in an entirely new application that will significantly reduce their fuel costs and emissions, while extending the life of the truck and providing a quieter work environment,” said Joe Dalum, president of Odyne Systems, LLC. “We envision that other communities with significant underground systems or companies with the need to export power quietly will be interested in exploring this technology to reduce their cost of operation while boosting productivity. We also look forward to further optimization of the hybrid drivetrain and continued gains in efficiency through Odyne’s engineering collaboration with investment partner Allison Transmission.”

The Green Award is presented annually to the Work Truck Show product that best advances work truck fuel utilization as determined by a panel of trade media editors and fleet managers.

About Odyne Systems, LLC
Odyne is a leader in hybrid drive systems for medium and heavy-duty vehicles. Odyne’s advanced plug-in hybrid technology enables trucks over 14,000 pounds to have substantially lower fuel consumption, lower emissions, improved performance, quieter job site operation and reduced operating and maintenance costs. Odyne has fielded more plug-in hybrid trucks to fleets throughout the United States than any other supplier. The company sells its unique modular hybrid system for new and retrofit applications direct to truck manufacturers and through a global distribution and service network. The name Odyne represents the combination of “O” for Optimal and “dyne” for power or force.  Odyne’s hybrid system for medium and heavy-duty trucks represents the best hybrid power solution for large trucks. For further information, visit us at www.odyne.com. and follow us on Twitter @Odyne.