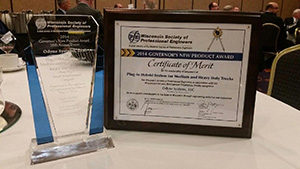 Odyne Systems, a hybrid systems provider for medium- and heavy-duty trucks, has been named a 2014 Governor’s New Product Award winner by the Wisconsin Society of Professional Engineers (WSPE), an organization of more than 1,000 engineers, whose mission is to support the ethical practice of Professional Engineering. The Best of State, First Place award in the small employment category was presented to Odyne in recognition for the company’s outstanding development of its Plug-in Hybrid System for Medium and Heavy Duty Trucks and economic contributions to the state through engineering initiative and innovation.

Odyne’s advanced plug-in hybrid electric systems for large trucks can reduce fuel consumption by up to 50% (depending upon the duty cycle), lower emissions, improve acceleration, and allow large work vehicles to operate quietly at a job site, powering equipment and tools with the engine off. Odyne’s systems can also provide heat and air conditioning to the cab without idling the engine and eliminate the need for generators by exporting power from batteries.

In 2014, the company installed 120-plus systems on new trucks throughout North America as part of a $45.4 million award from the Department of Energy, administered by the Electric Power Research Institute (EPRI) and in performance of projects from the state of California. Odyne accepted the award May 27 where they were recognized at a dinner event hosted by the WSPE in Green Bay, Wis.

John Petras, VP of Engineering and Principle Investigator Odyne Systems, LLC stated, “We are excited to be named a Governor’s New Product Award winner. I would especially like to recognize the Professional Engineers, without whom this award would not have been possible: Richard Swortzel, New Eagle, Mark Kosowski, EPRI, Michael Mitchell, Richard (Rit) Booth, and Thomas Widule, Rexnord Innovation Center. Our team has a passion for innovation and delivery of reliable, advanced hybrid system solutions. This award reminds us of the daily contribution that our engineering team makes to support energy independence efforts and environmental initiatives.”