Wisconsin Clean Cities, Inc. (WCC) hosted its 21st Annual Stakeholder Meeting on December 8, 2015 at the Harley-Davidson Museum in Milwaukee. Over 100 attendees participated in the event which celebrated the efforts and accomplishments of its members and Wisconsin Fleets in moving toward the use of alternative fuels and cleaner air for Wisconsin. Featured speakers at the event included Lieutenant Governor Rebecca Kleefisch, Bill Davidson of the Harley-Davidson Museum, and Maria Redmond of the Wisconsin State Energy Office. 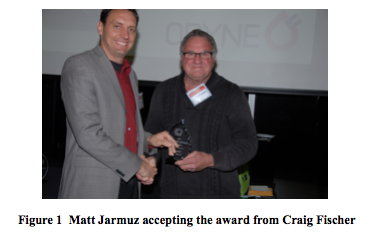 Matt Jarmuz, Director of Sales for Odyne Systems stated, “We are honored to have received the Technology Award from WI Clean Cities and look forward to working closely with truck owners in Wisconsin to apply environmentally friendly Odyne hybrid systems in their fleets to help WI Clean Cities reach its goal of cleaner air for Wisconsin.”

Odyne received the 2014 Governor’s New Product Award by the Wisconsin Society of Professional Engineers (WSPE), an organization of more than 1,000 engineers, whose mission is to support the ethical practice of Professional Engineering. The Best of State, First Place award in the small employment category was presented to Odyne in recognition for the company’s outstanding development of its Plug-in Hybrid System for Medium and Heavy Duty Trucks and economic contributions to the state through engineering initiative and innovation.

About Odyne Systems, LLC
Odyne is a leader in hybrid drive systems for medium and heavy-duty vehicles. Odyne’s advanced plug-in hybrid technology enables trucks over 14,000 pounds to have substantially lower fuel consumption, improved performance, quieter work site operation and reduced operating and maintenance costs. Odyne has fielded more plug-in hybrid systems for large trucks throughout the United States than any other supplier. Odyne systems are modular and are integrated to powertrains during the vehicle manufacturing process or are retrofit to existing truck chassis in various applications. The systems are sold and serviced through a worldwide distribution network including Altec and Terex Utilities. Odyne has also authorized selected Allison Transmission distributors to service Odyne systems across North America. For further information, visit us at www.odyne.com.

About Wisconsin Clean Cities
Wisconsin Clean Cities (WCC) is a 501c3 tax-exempt, stand alone, non-profit organization that was designated as the 12th Clean Cities Coalition on June 29, 1994, through the U.S. Department of Energy’s Clean Cities Program. WCC was founded on the principle that motivated individuals working together for common goals to best accomplish our nation’s objectives. In almost 100 coalitions, government agencies and private companies voluntarily form partnerships that meet the objectives of improving air quality, developing regional economic opportunities and reducing the use of imported oil. Visit www.wicleancities.org to learn more about the organization.